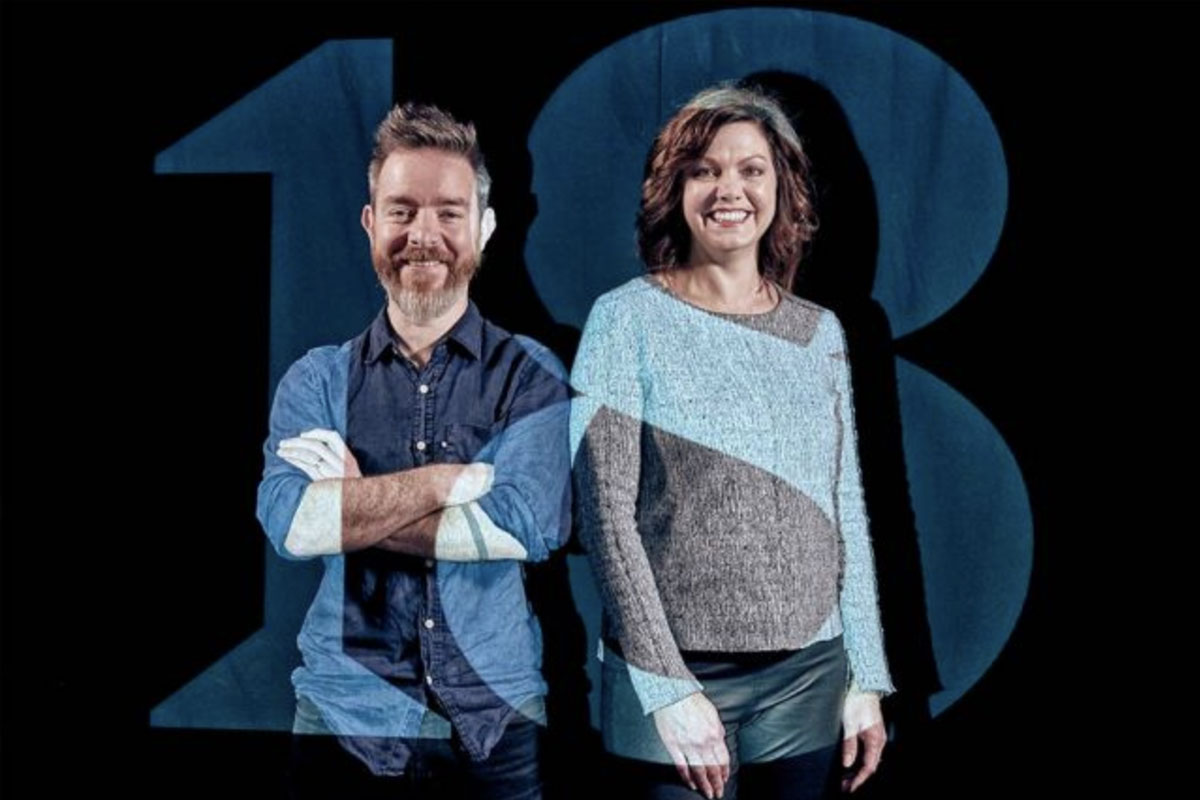 State Theatre Company might be starting 2018 in London but will end the year in Port Pirie with its largest ever state-wide touring program taking productions to 14 venues across South Australia.

2018 will also mark the Company’s biggest ever season with two additional productions, and its highest number of commissioned works - four of the nine productions will have their premiere in South Australia.

It follows a highly successful 2017 season to date which has seen two box office records broken with The Secret River and 1984, national touring with 1984, national regional touring and engagement with Sista Girl and The Popular Mechanicals and the launch of State Theatre Company’s Ensemble performing two shows back to back with A Doll’s House and Macbeth.

Next year, Artistic Director Geordie Brookman explores belief as a core theme running through the program, with many of the stories set in regional communities as the Company renews its focus on South Australia.

2018 will also be the second year for the recently formed State Theatre Company Ensemble, a group of actors and creatives who’ve taken residence at the Company to work on a number of productions.

The year will open with In The Club, the first of State Theatre Company’s commissioned productions, and an impactful start to the season. Written by Patricia Cornelius, one of Australia’s most awarded playwrights, In The Club explores the off-field culture surrounding AFL players, treatment of women and the club behind the club. The riotous and awkward comedy of manners After Dinner will come to the Dunstan Playhouse (7-29 April) with its story of eccentric lonely hearts in a 1980s pub, a night of bad dance moves and tested friendships.

Written by master playwright Andrew Bovell (The Secret River, Lantana), one of Australia’s finest writers, After Dinner will be led by the brilliant Jude Henshall (Mr Burns, The Comedy of Errors) and see the Adelaide return of the suave Nathan Page star of State Theatre Company’s hit production of The 39 Steps. It will be directed by Adelaide-based Corey McMahon, who enjoyed success last year with the national tour of Orwell’s 1984.

Kate Hamill’s sparkling adaptation of Sense and Sensibility, which has enjoyed a series of smash hit seasons in New York over the last few years, is set to delight both lovers of Jane Austen and attract new audiences with her adaptation of the script.

Described as one of the finest adaptions of the literary classic, it will be a night of theatre to remember in the hands of Geordie Brookman and State Theatre Company Ensemble.

May 2018 will see the world premiere of Fleur Kilpatrick’s Terrestrial open at the Matthew Flinders Theatre ( 2 – 4 May) before then touring in region and metro South Australia (until June 19) and returning to Adelaide’s Space Theatre (May 23 – June 2). The Jill Blewett Playwright Award winner makes her debut with State Theatre Company.

Set in Leigh Creek, Terrestrial centres on the connection between a newly arrived outsider and a local in a small remote town, against the backdrop of the community collapsing in on itself with the impending mine closure. Terrestrial will be directed by the State Theatre Company’s former Resident Director Nescha Jelk.

Brothers Wreck, a tender and human piece of storytelling, follows the story of a young man in a changing world forced into a journey of self-discovery following a family tragedy. The co-production follows State Theatre Company’s highly successful collaboration with Malthouse on The Events in 2016 and the success of Brothers Wreck during its premiere Sydney season.

A sweeping stage adaptation of Tim Winton’s breathtaking 1986 novel That Eye, The Sky by Justin Monjo and Richard Roxburgh will be directed by Kate Champion. It’s the second stage adaption of a Tim Winton novel Kate has worked on, having previously choreographed the internationally acclaimed production of Cloudstreet. That Eye, The Sky follows the story of a 12 year old trying to make sense of life in a small country town, one of a number in the season set in small regional communities. The cast includes State Theatre Company Artist in Residence Elena Carapetis.

Faith Healer is made up of four monologues performed by three characters – Francis Hardy (Colin Friels) the titular healer, his wife Grace (Alison Whyte) and his manager Teddy (local favourite Paul Blackwell). Each share their perspective on itinerate lives together. As the stories unravel a web of half-truths and personal mythologies is revealed with stunning effect.

This production of Faith Healer has enjoyed smash hit runs in Sydney and Melbourne before coming to Adelaide, and is set to be a popular choice for local audiences. 2018 ends in Port Pirie with The Gods Of Strangers with rising star local playwright Elena Carapetis bringing the stories of her Greek and Cypriot family to the stage in a play that explores the immigrant experience in post-war Australia.

The Gods Of Strangers represents a significant moment for State Theatre Company. The debut of a large scale new dramatic work is always to be celebrated but in this case the Company will also celebrate premiering a work made through drawing on the stories of two of our migrant communities and their experiences in one of our regional centres.

Later in 2019, Geordie is planning a move to Europe with his young family.

General Season
2018 represents another ambitious step in the Company’s aspiration to deliver international class theatre all over South Australia, the country and the world. I’m delighted that four out of our nine works come from our commissioning program, reaffirming our commitment to being one of the best new work companies in the country.

In The Club
I’m thrilled to be brining the bombastic work of Patricia Cornelius to the Company. When the Ensemble and I thought about writers we would be excited to create a new work with Patricia was top of the list. In The Club is powerful, unforgiving and unashamedly highrisk.

After Dinner
I couldn’t think of a better way to celebrate one of our most loved playwrights, Andrew Bovell, than by reviving his delicious early career comedy. It’s fall off your chair funny, fabulously inventive and utterly poignant in the way it talks about how and why we love.

Sense and Sensibility
To bring our Ensembles’ time with the Company to a close we wanted to embark on a project that would represent pure theatrical joy. In the collision of Jane Austen and American actor / playwright Kate Hamill we’ve found a piece that provides a limitless landscape for comedic invention while digging into the heart and soul of one of the Western canon’s great works.

Terrestrial
One of our two Jill Blewett Award winners Fleur Kilpatrick has created a tender yet twisting tale of social dislocation in regional Australia. It’s a beautiful new work that announces another powerful voice to the State Theatre Company stage.

Brothers Wreck
Jada Albert’s incredible debut knocked me for six when I saw the original production in Sydney some years ago. I’m delighted that we’re coproducing a new version with the brilliant Malthouse Theatre under the direction of Jada herself. No audience member will leave the theatre with a dry eye or indeed without hope in their heart.

That Eye The Sky
I’ve been wanting to program That Eye The Sky for years but have been waiting for the perfect team to come together. Being able to reunite the visionary director / choreographer Kate Champion with designer Geoff Cobham to create a rich landscape for Tim Winton’s beautiful words is tremendously exciting.

Creditors
Duncan Graham is one of the most intelligent playwrights South Australia has produced. In Creditors he’s taken the tricky but brilliant bones of Strindberg’s minor classic and turned it into a sizzling thriller.

Faith Healer
Sometimes you see a production and just know that you have to program it. That was the case with Faith Healer. The combination of one of the greatest pieces of dramatic storytelling in the 20th century, one of Australia’s best directors in the legendary Judy Davis and three of the country’s finest actors in Colin Friels, Alison Whyte and Paul Blackwell made Faith Healer one of the easiest decisions in my tenure. It’s theatrical dynamite.

The Gods of Strangers
The Gods of Strangers represents a significant moment for State Theatre Company. The debut of a large scale new dramatic work is always to be celebrated but in this case we also celebrate the fact that we are premiering a work made through drawing on the stories of two of our migrant communities and their experiences in one of our regional centres, Port Pirie.