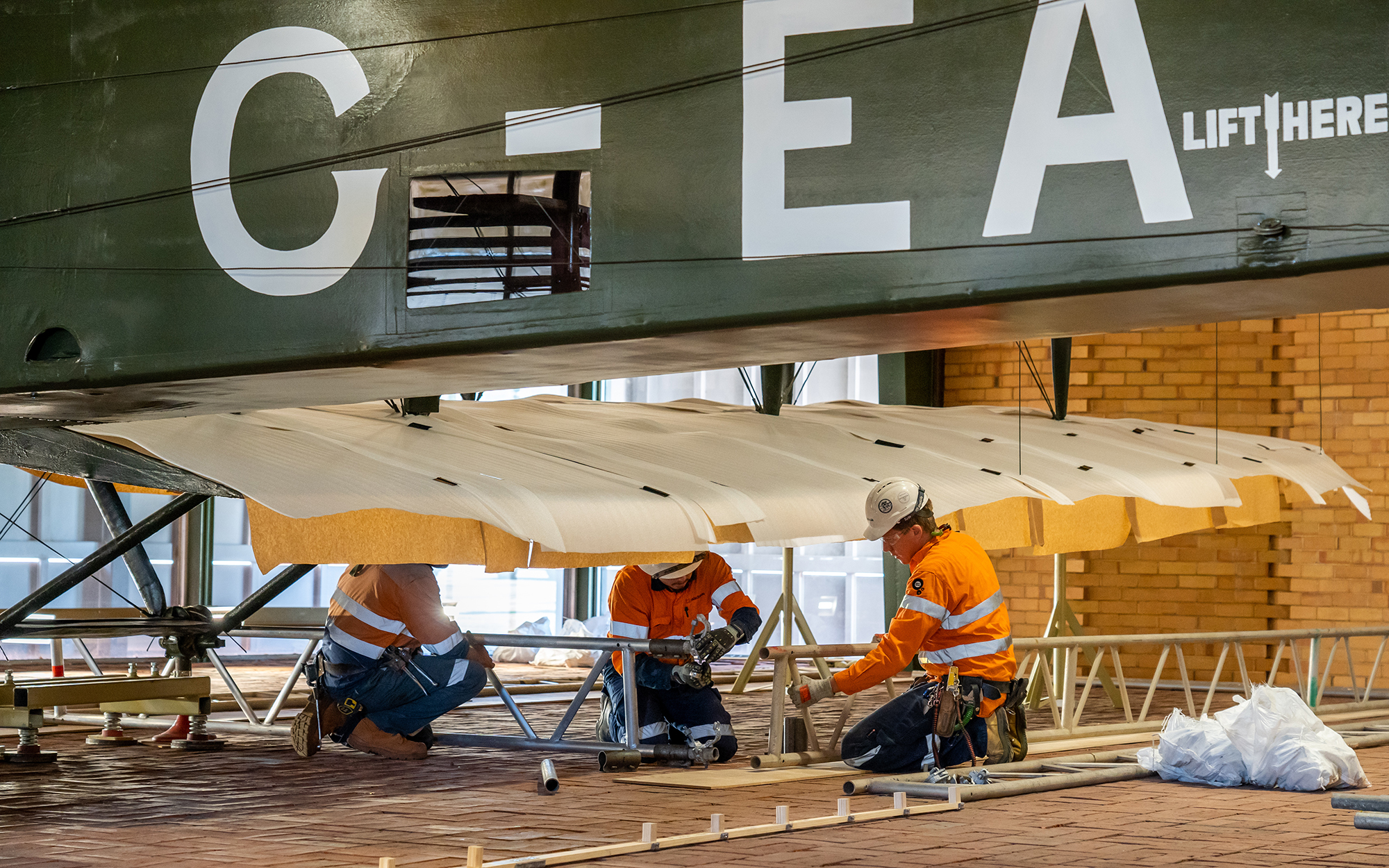 Work has started on the dismantling of the historic Vickers Vimy aircraft at Adelaide Airport ahead of its relocation to a new home within the airport’s main domestic and international terminal.

Adelaide Airport has appointed South Australia’s Artlab Australia, a recognised leader in the conservation of cultural collections to undertake the extremely delicate operation of deconstructing, relocating and piecing back together the more than 100-year-old Vickers Vimy, which was the first aircraft to fly from England to Australia in 1919.

Author and aviation history specialist, David Crotty, has been appointed as the exhibition curator, while leading South Australian architecture firm Baukultur and exhibition design specialists Arketype have designed the new exhibition space for the Vickers Vimy.

Besix Watpac has been appointed to undertake the construction works required for the relocation and exhibition space, following its successful completion of Adelaide Airport’s terminal expansion project.

The Vickers Vimy relocation project has been jointly funded by the Federal Government, South Australian Government and Adelaide Airport.

“We’ve completed construction of the new space for the Vickers Vimy within the Adelaide Airport terminal as part of our $200 million terminal expansion project – so we’re now able to commence the delicate work of moving the aircraft to its new home,” Mr Cox said.

“The Vickers Vimy is a treasured national asset and Adelaide Airport is proud to be its custodian.

“A significant amount of planning has already taken place to find the best solution to move what is an extremely fragile object. The aircraft will be separated into three pieces – the two outer wings, the fuselage, and the engines with the stub wings.

“Scaffolding is being built around each segment to carry the weight and protect the structure during the move. Even then, the project team will only have a gap as little as 70mm either side to manoeuvre it out of the existing memorial building and then into the new terminal space.”

Federal Finance Minister and Senator for South Australia Simon Birmingham said the careful transfer of the Vickers Vimy is the final step in restoring the historical national asset to its former glory.

“The prominent new home of the Vickers Vimy in Adelaide Airport will serve to educate generations to come of our state’s pioneering and aviation history,” Minister Birmingham said.

“This iconic aircraft, in its new purpose-built facility will be a great addition to South Australia’s cultural heritage and tourism and be the crowning glory of the newly expanded Adelaide Airport.”

SA’s Education Minister John Gardner said it was wonderful the Vickers Vimy would be positioned in a prominent location at Adelaide Airport.

“The Vickers Vimy is one of the most significant aviation artefacts in the world and it is a privilege to have it right here in Adelaide,” Minister Gardner said.

“The Marshall Liberal Government is honoured to play a role in ensuring this important piece can be displayed in a wonderful exhibition space, showcasing this enduring symbol of our country’s contribution to the world’s aviation history.”

The Vickers Vimy – a biplane made of wood lined with fabric with open cockpits - was the first aircraft to complete the epic journey between Hounslow in England and Darwin in Australia as an entrant in the 1919 Air Race.

Flown by South Australian brothers Sir Ross and Sir Keith Smith along with mechanics Wally Shiers and James Bennett, the 18,000km pioneering flight took 28 days to complete with no more than a compass and maps for navigation.

It's anticipated the Vickers Vimy’s next journey of 2.1km, travelling at walking pace to its new home in the Adelaide Airport terminal, will take place in March. Construction of the exhibition space will follow with the exhibition due to open to the public later in the year.

This link provides archival footage of the Vickers Vimy and the 1919 Air Race.

This link provides supplementary vision of dismantling the Vickers Vimy.