Blog: Is LinkedIn cluttered with crap? 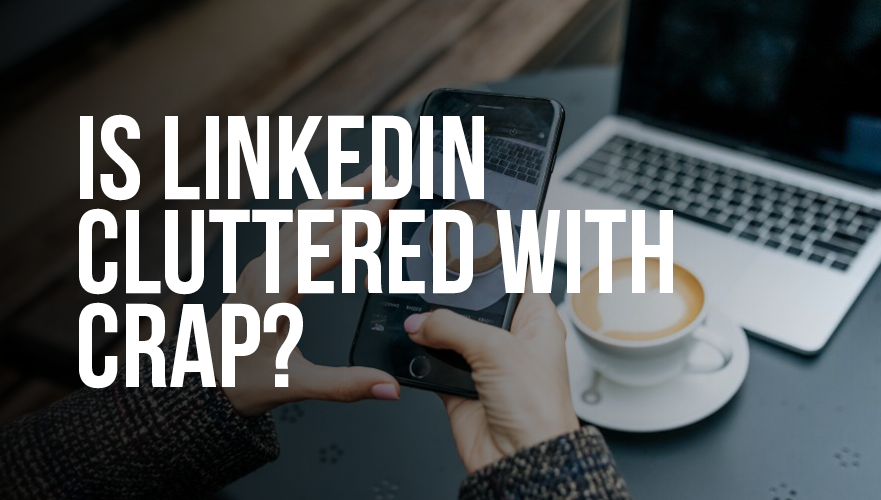 The article labelled LinkedIn the 'Facebook of the business world' and called out the self-serving, humble bragging culture that has taken over a platform that once prided itself on thought leadership, professional networking and considered debate.

It's a harsh call, but fair. And I completely agree with Aaron's points.

"[LinkedIn] is a cultural force that not only propogates values throughout the business world, but shapes them, through the relentless self-praise that appears on its feeds and the portrayal of obvious solutions as insightful." - Aaron Patrick

Aaron Patrick’s opinion piece about the changing face of LinkedIn should be a touchstone that any LinkedIn user comes back to again, and again.

As a provider of LinkedIn professional development training to organisations across Australia, I repeatedly hear feedback about the sheer amount of clutter (crap) starting to appear in news feeds. Posts that don’t genuinely offer value or insight but which err on the side of self-serving and humble bragging.

LinkedIn had quite the year in 2020, when the COVID-19 pandemic forced our attention to professional networking on LinkedIn and the cancellation of in-person networking events. Much like Zoom, WebEx and many other digital communication platforms, LinkedIn was in the box seat. The platform is the world leader for professional online networking.

It wasn’t always that way of course – most of us were introduced to LinkedIn as an online ‘Rolodex’ to store contacts, or another place to present your resume for recruitment. LinkedIn has come into its own as the fastest growing of the top tier social media platforms in recent years and particularly since its acquisition by Microsoft in 2016.

But in 2021, LinkedIn might well be at a crossroads. Of the 303 million monthly LinkedIn users globally, only 3 million of those users currently post content once a week. That’s a significant gap that I expect will be rapidly filled in this post-COVID era of professional networking, professional brand building, reputation management and business development.

As users of the platform we find ourselves at the mercy of LinkedIn and Microsoft – will the platform continue a Facebook-style spiral that moves so far away from its touchstone that it plateaus? Or, will it take hold of the conversation and algorithm to encourage, support and mandate the quality insight, professional opinion and considered debate for which the platform was established. Its touchstone.

Simply, will we see less of the 'virtue signalling' posts? You know the ones I mean, the; '10 years ago I was collating newspapers in the printing press at the newspaper. After eight months I went to my boss with an idea. Today I'm CEO of that company' (and aren't I awesome).

Virtue signalling (noun):
the action or practice of publicly expressing opinions or sentiments intended to demonstrate one's good character or the moral correctness of one's position on a particular issue.

My advice to LinkedIn users? “Be the change you want to see”. Write posts that genuinely encourage considered debate or conversation, posts that share your knowledge and invite others to do the same. Sure, share the recent promotion or testimonial, but keep that to the less than 10% of what you post each month. Be genuine in your encouragement and praise of others. Treat LinkedIn like you would an in-person networking event – professional, authentic and classy.

What do you think? I'd love to hear your comments about where you think LinkedIn is headed and the role it plays in your professional life.

Find out more about my LinkedIn training sessions here.